Patricia Kennealy’s relentless focus on “the opposition”, Pamela Courson, and a mysterious “psychic” who can “channel” deceased rock stars and their deceased girlfriends has a message similar to Kennealy’s.

“Patricia Kennealy sounds like she is just a few degrees away from stealing Courson’s panties and rooting through her trash.”

“I’d be interested to see a genuine attested reference by JIM to Pamela as his wife.”

What is certain is that Jim Morrison made absolutely no public reference to Patricia Kennealy. Not as his girlfriend and, according to those who knew him, certainly not, publicly or privately, as his…”Pagan wife”.

“Pam said that she and Jim were married, and I believe Pam because Jim never said they weren’t.”

However, Morrison did write the phrase “in the event we have not YET been wed” in the first draft of his will.

“Everyone knows Patricia Kennealy is the woman who stalked Jim Morrison, who claimed to be officially engaged to Jim, who claimed to marry him, and now claims to be his widow. The only woman that Jim ever took seriously was Pamela. They experienced every facet of a relationship that could be experienced together. She was his old lady. She is the only woman he ever allowed to say she was his wife.”

And Jim Morrison did make several public references to Pamela that seemed quite genuine: 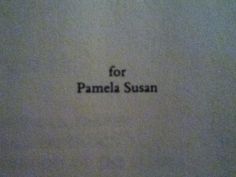 Jim Morrison’s dedication page from The Lords and The New Creatures, “for Pamela Susan”. 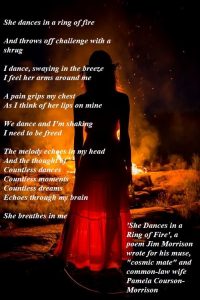 She Dances in a Ring of Fire, a poem Jim Morrison wrote for Pamela Courson, from ‘Wilderness: The Lost Writings, Volume 1’

An excerpt of Jim Morrison’s handwritten will: “January 21, 1969, To Whom It May Concern, I bequeath all of my worldly possessions to my only companion in life, Pamela Susan Courson, in the event we have not yet been wed. Jim Morrison.”

“I become either the lightning rod for all the evil negative emanating from the dementoids  psychotically identify with Pam, glorifying her, denying her factual and attested nature for a fantasy of someone who was definitely NOT Pamela Courson, revisionistically [sic]revamping her role in Jim’s life, savagely trashing anyone whose truth conflicts with their deeply delusional construct.

“So, Kennealy just ADMITTED that she ‘revisionist-ically’ revamped Pamela Courson’s role in Jim Morrison’s life and is ‘savagely’ trashing anyone whose truth conflicts with her deeply delusional construct’. And she says she has an excuse!”

And, Miss Kennealy, it was Pamela Courson’s deep grief, trauma, pain and despair after Morrison’s death – grief, pain, trauma and despair that you publicly sneered at – that was grounded in real loss.

“I can personally recall only three articles in which Pamela was specifically mentioned before July 1971, as someone eager to glean as much strategic information as I could on the opposition, believe me, I was out there looking…”

“Suddenly Patricia Kennealy’s inner bunny-boiler shows up.  Not just that she refers to Morrison’s LONGTIME GIRLFRIEND as ‘the opposition’, but that she was ‘eager’ to get ‘strategic information’ on Courson.

Seriously, that is creepy. It sounds like Kennealy is just a few degrees from stealing Courson’s panties and rooting through her trash.”

Kennealy’s apparent obsession with Pamela would explain the natural brunette dyeing her hair red and the way Kennealy styles her makeup for photo shoots.

It is as if she is trying to take Courson’s place. 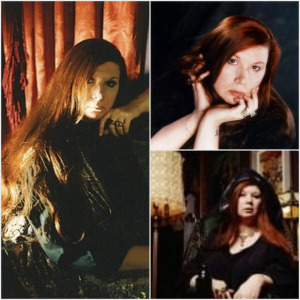 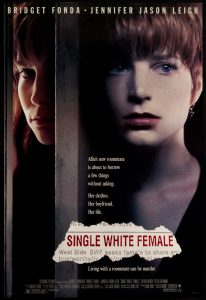 “Patricia is now preparing a voodoo doll, some cheesy-looking black candle in the shape of a woman. She’s going to stick it full of pins with the proper mumbo-jumbo and then leave it in Pamela’s car. This is it–this is where I draw the line.”

And then there is “Jacqueline”, a “divine psychic”,  who has gone online claiming to have contacted the spirit of Pamela Courson. 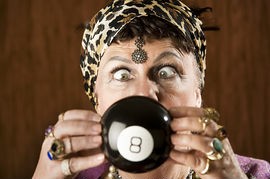 This “divine psychic” goes on to put a lot of false and libelous “confessions” in the mouth of the conviently dead Pamela Courson.

Would this “Jacqueline” just happen to be the same “Jacqueline” – Jacqueline Murray  – who wrote the book, A Tale of Two Brothers: Jim Morrison and Michael Hutchence ?

Two “psychic” Jacquelines, both claiming to have a “connection” with the late Jim Morrison and both making nasty comments about the late Pamela Courson.

Is it just a mere coincidence that both “Jacquelines” offer the very same narrative that Patricia Kennealy has been pushing since the 1990s?

According to those who have read “Jacqueline’s” A Tale of Two Brothers book;

Kennealy knows her way around publishing companies and around the world of self-publishing.

And looking at the cover of “Jacqueline’s” book; there is an eagle and a lizard featured on the cover.

There is no eagle symbolism associated with Michael Hutchence but Jim Morrison is referred to as the Lizard King and Miss Kennealy likes to publicly refer to herself as “the Lizard Queen”. 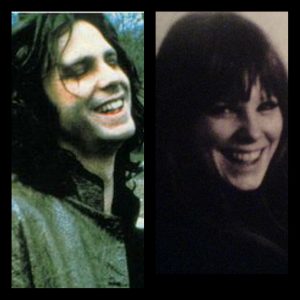 And “soulmate” is a term that Kennealy has used more than once in reference to Jim Morrison.

“Patricia also told me about the ‘handfasting’, although I don’t remember her using that term. I do remember her using the word ‘soulmates’ but quickly adding, at my politely but skeptically raised eyebrow, that she’d meant it in the sense they were fellow artists. She didn’t seem to give it much importance.”

Judging by the things that Kennealy has publicly admitted to doing

it would not surprise me to find out that Kennealy would be willing to sink to writing this book or that she would sink to posting “Jacqueline’s” transparent “psychic reading” online.

This all just speculation on my part, of course, but the mysterious nature of “Jacqueline”, that both “Jacqueline” and Kennealy just so happen to share the same views on Pamela Courson and taking Kennealy’s antics into consideration – this all sounds just bit too coincidental.

“The one idea that Patricia Kennealy can never entertain: the idea that Morrison may have actually had real, genuine love for Pamela Courson. She’ll suggest just about any other reason for Morrison to have stayed with Courson EXCEPT that.

Patricia Kennealy’s whole identity is wrapped up in being the ‘bride’, ‘soulmate’ and ‘only REAL love’ of Jim Morrison. Therefore the woman who got together with him BEFORE his fame, stayed with him for the rest of his life and by all accounts passionately loved and was loved by him must be vilified.

According to Kennealy, the people who were actually WATCHING as Morrison fell in love with Pamela were totally wrong, and spent months with them as they fell in love. No, the woman who didn’t even know either of them back then knows EXACTLY why they got and stayed together.” 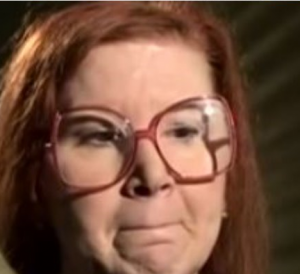 “Patricia also obsesses about Pamela and how Jim Morrison continues to ‘cleave unto’ Pamela instead of ‘cleaving unto’ her, especially since Patricia is SO much more worthy of Jim’s love. I wonder how much of this Jim knows, or at least suspects? ‘She’s done a lot worse than that’, he  said.”

“Patricia Kennealy claims to have the first, last and only word on Jim’s relationship with Pamela, the dynamics, the emotions, and how he saw her… despite spending almost no time around the two of them.”

“Pam HERSELF told me they weren’t married.”

“She was bad for him, she was nuts, she was abusive and addicted.”

“But, in a sense, with Pam Jim was like a battered wife.”

“When she wasn’t strung out on smack or screaming at Jim like a fishwife.”

“She was a slut all during her relationship with Jim and became a hooker after his death.”

“I’m right about Pam, too, you know–and I always have been.”

“I WASN’T AROUND PAM ALL THAT MUCH, I ONLY MET HER A COUPLE OF TIMES.”

“Patricia Kennealy seems utterly obsessed with Pamela Courson, Courson’s name is mentioned (on average) at least every 3 pages and Kennealy cannot seem to let go off how beautiful Pamela really was: ‘Pamela Susan Courson, nine months younger than I, three years younger than Jim, is a staggeringly pretty woman.’, ‘By no means charmless, extremely pretty..’, ‘She was pretty, she was charming, and so on…’.”

– ‘She Dances in a Ring of Fire’ Tumblr Blog, and their review of Kennealy’s Strange Days

“Pamela showed me a marriage certificate when I was in Paris with her. Clearly no one else in Jim’s life was as close to him as Pamela was. Of course she was his wife, Pamela was Jim Morrison’s soul wife if nothing else.“

Q. Would you say that Pam was truly the only real relationship that Jim had during the last five years or so of his life?

“The only constant and enduring relationship, definitely, but it was a long and stormy one. There was a certain part of Jim that he dedicated solely to her; and he dedicated his books to her.”

– Frank Lisciandro, close friend of Jim Morrison, author of An Hour For Magic and Jim Morrison: Friends Gathered Together 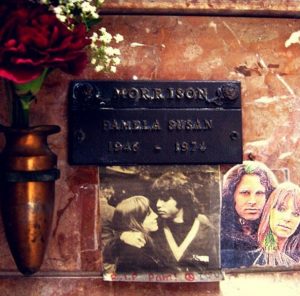 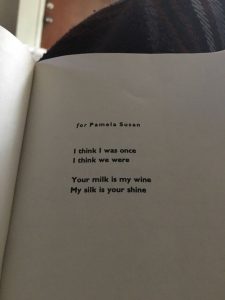 ‘I think I was once

I think we were

Your milk is my wine

My silk is your shine’