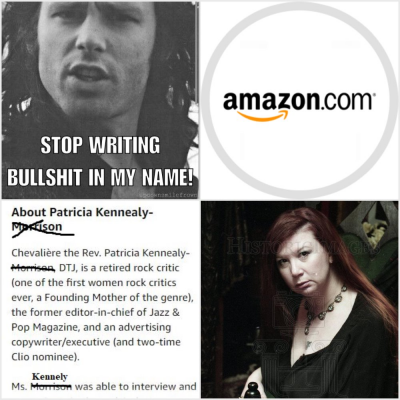 One would think that Patricia Kennealy’s Amazon.com Author “Biography” would be about the books Miss Kennealy has written. However, Miss Kennealy managed to use Jim Morrison’s name in order to promote her disproven claims about the brief time she spent with him.

Chevalière the Rev. Patricia Kennealy-Morrison, DTJ, is a retired rock critic, one of the first women rock critics ever, a Founding Mother of the genre, the former editor-in-chief of Jazz & Pop Magazine,

Retired? You worked for a little-known magazine for maybe three years. (Retired?)

Rock journalism was already in place before you utilized your job at Jazz & Pop Magazine as way to meet Jim Morrison, as you admitted in 2013.

I am confused as to why Miss Kennealy likes to point out that she was “one of the first women rock critics” when she has publicly admitted that laying siege to Jim Morrison was the ONLY reason she wanted to work for Jazz & Pop.

Being female and being a rock critic actually seemed secondary to Miss Kennealy.

“Editor in Chief”? That’s strange. The folks at Jazz & Pop had numerous writers working for them and according to sources you were one their many editors, not their “Editor in Chief”.

and an advertising copywriter/executive (and two-time Clio nominee).

I’ve never heard of someone being promoted to the “executive” level after only working for a short time on two unsuccessful advertising campaigns.

Ms. Morrison was able to interview and meet giants in the rock industry — Jefferson Airplane, Janis Joplin, Jimi Hendrix, David Bowie, and others — along with the man who would become her husband, singer/songwriter/poet Jim Morrison, also a member of the band, The Doors.

Her husband was the one who encouraged her to write fiction and she took to it with a vivid imagination. Her books of The Keltiad (The Copper Crown, The Throne of Scone, Blackmantle, etc) made it to the New York Times bestseller list.

Jim Morrison died several years before Kennealy to began writing fantasy romance novels. (After Miss Kennealy was done with being a “chief” and an “executive”.)

Also, according to Jim Morrison’s surviving band mates, his friends, people who worked for The Doors and for Elektra Records and even according former friends of Kennealy herself – Miss Kennealy was merely one of many women who had a brief fling with Morrison and Kennealy may have spent as much as a week-and-a-half with him before she began to aggressively pursue and harass him.

It doesn’t sound like the two spent enough time together in order for Morrison to take an interest in Kennealy’s third career as a fantasy writer, let alone act as her “husband” and give her any advice about it.

Are we also expected to believe that Miss Kennealy already had detailed plans to start writing fiction for a living at the time of her fling with Jim Morrison?

Amazon does not require that any of the statements you make are true.